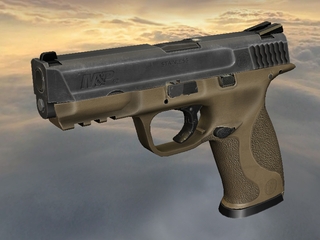 We currently do not have any composite handguns with optics. When the FN tac was first announced the younger generation, including myself, was drooling over it. The idea of weapon mounted optics on a semi auto pistol has spread like the plague. Between the shooting sports community and the growing number of CCW's with red dots, the popularity of this movement is only increasing. Back to my point; we have the model of the M&P and with little modification you could transform the M&P in its current form into the M&P C.O.R.E. After that model an RMR, jpoint, and a DetaPoint, and you have one of the most talked about composite handguns on the market today. Another added bonus to going through with this project would be after modeling the optics they can be imported to other models (FN tac for example, or an acog scope with rmr for any of the AR's [M4, LR300, Tar]). Let me know if there is anything I can do to help. I have a C.O.R.E and can pull dimensions if needed. thanks again for the consideration.
Top

Interesting news, we have to think about it )
Top

Any progress or decisions on S&W M&P C.O.R.E?

Users browsing this forum: No registered users and 2 guests